Mach 1 had the pleasure of hosting former Arkansas Governor Mike Huckabee in March of 2020. You can watch the entire event below.

Thank you to all who attended 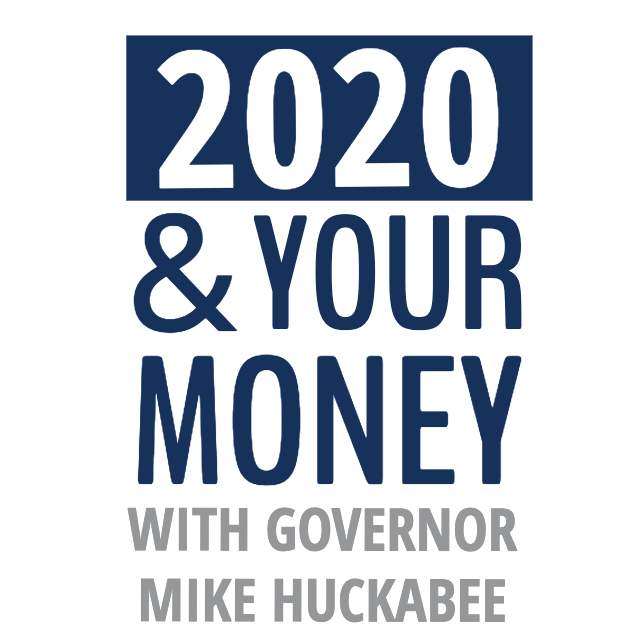 in support of FCA. 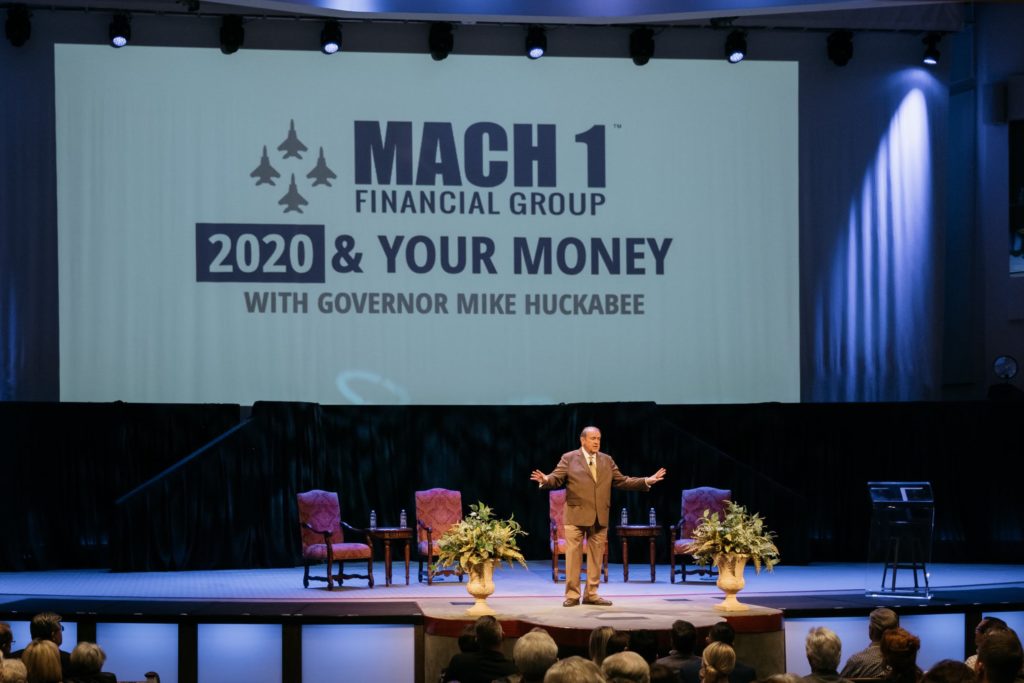 Because of YOU,
we were able to raise
$14,040
for the local Northwest Arkansas FCA. 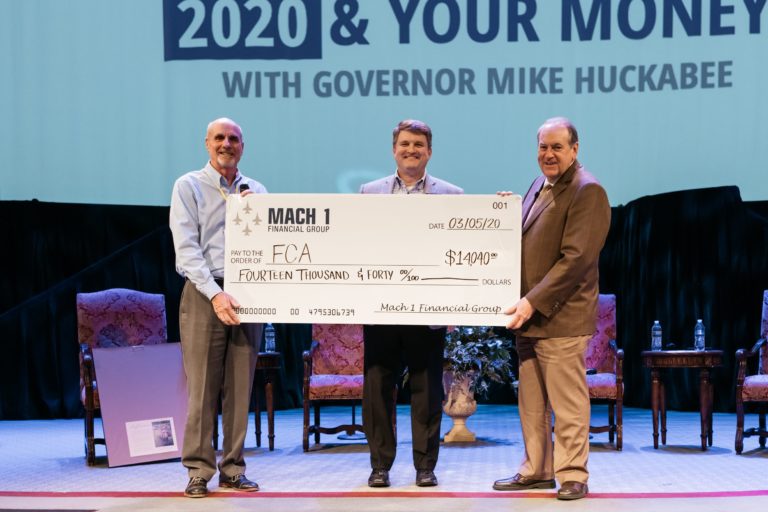 Click on the logo to learn
more about FCA 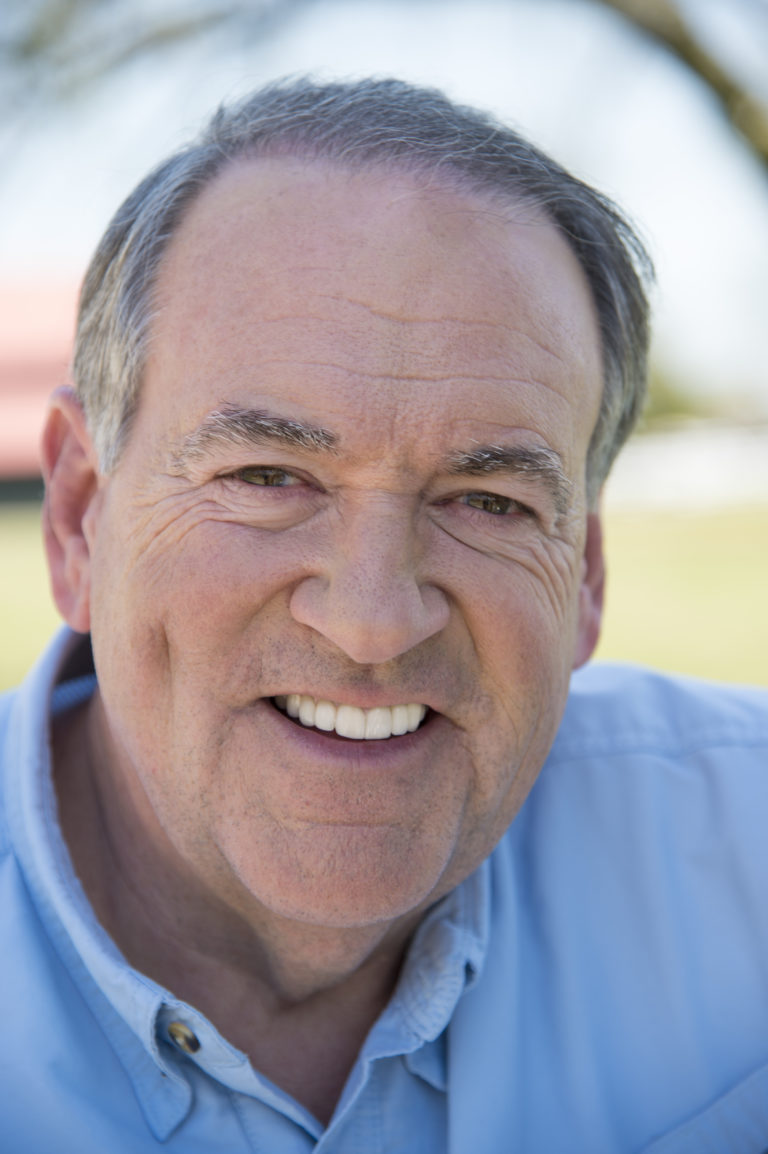 Mike Huckabee is the host of the TV show “Huckabee” on TBN each weekend and is a Fox News contributor, NY Times best selling author of 12 books, and a frequent speaker for corporate, civic, and non-profit groups all over the world.

He was the 44th Governor of Arkansas from 1996 until 2007, becoming one of the longest serving Governors in his state’s history. He left a legacy of tax cuts, job creation, the reconstruction of his state’s road system, K-16 education reform, and a nationally heralded and duplicated health initiative that focused on prevention. His administration fought long-standing corruption in the state’s political machine, resulting in numerous indictments and convictions of powerful legislators and other elected officials. In 2008 and 2016, he ran for President of the United States, finishing 2nd in the Republican primary in 2008.

Governing Magazine named him as one of its “Public Officials of the Year” for 2005, and Time Magazine honored him as one of the five best governors in America. He served as the Chairman of the prestigious National Governors Association as well as the Education Commission of the States, the Southern Governors Association, and the Interstate Oil and Gas Commission. He has been nationally recognized for his advocacy of the arts in education and raises money to provide musical instruments for children.

Huckabee, an avid musician since age 11, is a bass player and often joins guest artists on his weekly television show, having played with Willie Nelson, Lynyrd Skynyrd, Toby Keith, the late George Jones, and many others. His hobbies include hunting, fishing, and music. He was named one of the “25 Most Influential People” for Conservation by Outdoor Life Magazine, and was named “Man of the Year” by the American Sportfishing Association in 1997. He is on the board of CMA (Country Music Association) Foundation, and is co-owner of radio stations in Arkansas, Texas, and Missouri.

The former governor and his wife, Janet, spend time in Florida and Arkansas and have three grown children – John Mark Huckabee, David Huckabee and his wife, Lauren, and Sarah Sanders and her husband, Bryan – and six grandchildren. 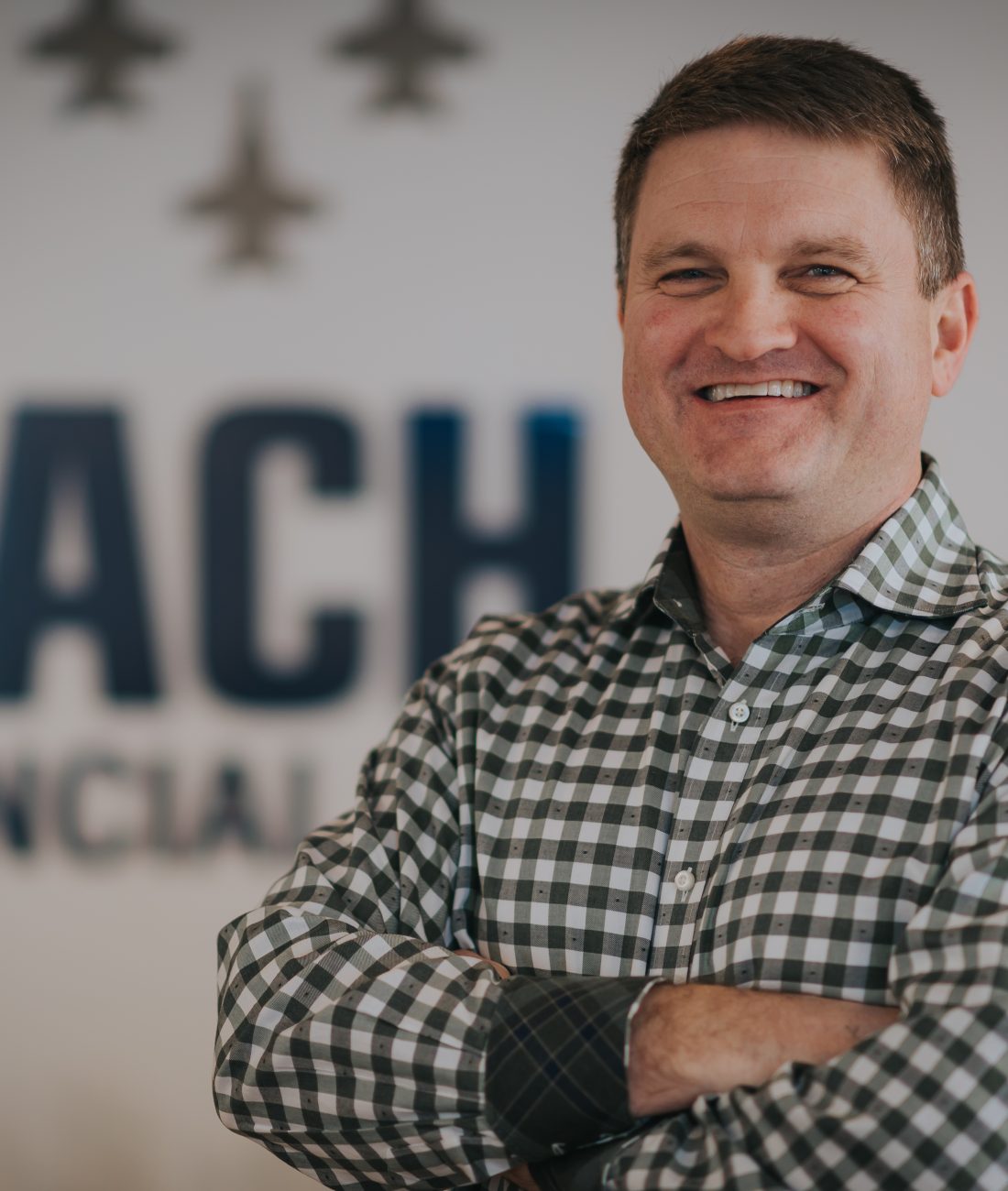 David A. Lee is founder and CEO of Mach 1 Financial. After serving nearly a decade in the U.S. Air Force as an F-16 Fighter Pilot, David entered the business world seeking a more stable lifestyle for his wife and young children.

Since 2005, David has worked diligently to help protect the retirement assets of hundreds of retirees in Northwest Arkansas, the River Valley, Northeast Oklahoma and Southwest Missouri. By focusing his practice on investment strategies that incorporate risk mitigation and laddered retirement income structures he skillfully piloted his clients through the 2008 financial crisis. He holds a Series 65 license (Fiduciary) as well as a life insurance license**, is a member of the American Financial Education Alliance (AFEA) and is a Registered Financial Consultant (RFC). David was featured in the December 2012 issue of Newsweek as “financial trendsetter” and was a contributor to “Victory: The World’s leading Experts Reveal Their Secrets for Winning in Health, Wealth, & Success in the New Economy,” a book featured on the “Amazon Best Seller’s” list.

David and his wife, Jennie, have two children, Faith and Connor. They reside in Springdale, Arkansas where he enjoys church and charitable related activities, spending time with family, flying, fly fishing, basketball, college football and traveling. 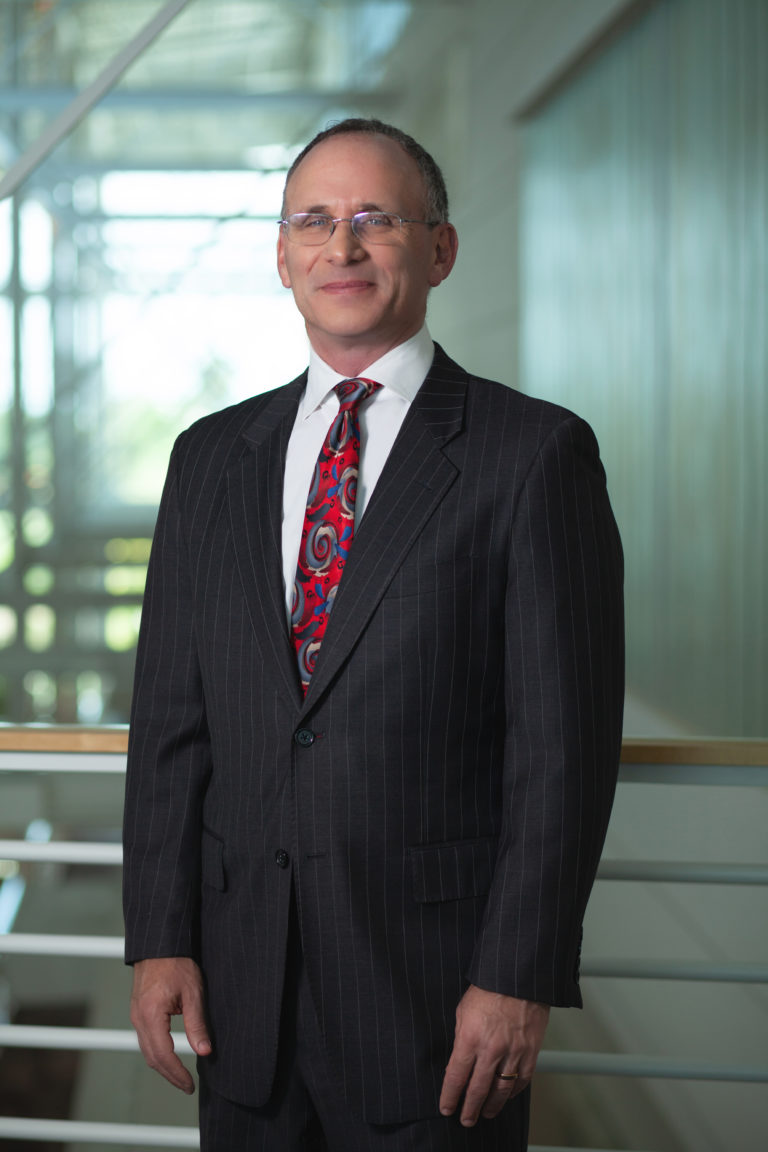 Prior to joining Security Benefit in 2001, Wolff worked at Allstate Life Insurance Company where he held various product development and investment-oriented roles.  He began his career as an actuary with Ernst & Young in Chicago. Wolff earned his Bachelor’s of Science in Finance from the University of Illinois, where he graduated with honors.  He is a Chartered Financial Analyst and a Fellow in the Society of Actuaries. 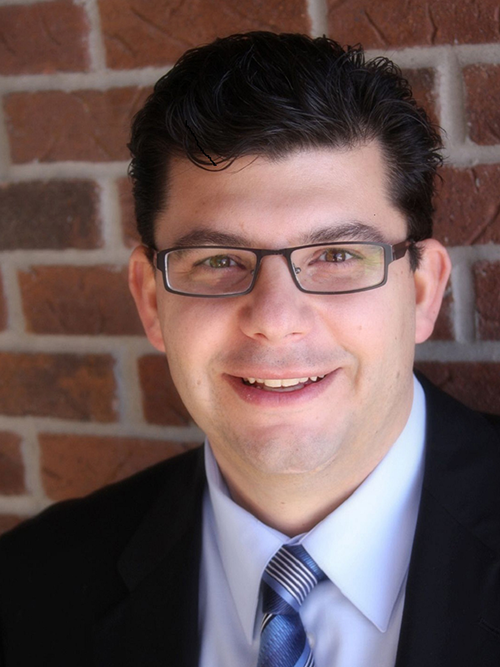 Jay Pestrichelli is CEO and managing director of ZEGA Financial. He leads the development and execution of the firm’s investment strategies, which are designed to help investors successfully navigate volatile and uncertain markets through innovative hedging strategies.

ZEGA’s founding principles grew out of the bestselling book Jay co-authored entitled “Buy and Hedge, the Five Iron Rules for Investing Over the Long Term.” His book highlights how to bridge the complicated nature of options investing with the needs of the everyday investor.

Outside of ZEGA’s day-to-day work for its clients, the firm actively supports multiple not for profit organizations throughout the year. Some of these organizations include the National Multiple Sclerosis Society, Samaritan’s Feet, CIA Officers Memorial Foundation, and Decoding Literacy.

Jay has been a regular contributor on NASDAQ Trade Talks and the TD Ameritrade Network and is a regularly quoted in top news outlets including The Wall Street Journal, Bloomberg, TheStreet.com, MarketWatch, US News and World Report, Fox Business and CNBC. ​

Our offices will be closed Friday due to winter weather and our staff will work virtually.